And we are back and we’ve been going through a lot of information, a lot of information about the natural growing cycle of vegetable gardening. We talked about how plants feed the soil and then in turn the soil, feed the plants back. And that’s where we get that cycle. So this segment is part of this.

Eliminate the host of the disease or the pest. And we’re not always gonna eliminate them, but if, if we can do that now, just looking, there’s a bee flying around, down here, gonna pollinate some of these, uh, some of these cucumbers. That’s really cool. The natural pollinators, as far as pests and disease, I hope that clears up any misconception.

This segment is about working to help combat them hosts and today’s is going to be about the number two principle that we have in that vegetable growing cycle. And that’s what we call the actual term that we call it is the armor layer. We call it armor because it’s a protective cover that covers the soil, but it does way more than that.

It has so many functions that we won’t get into on this video. But later on we’ll, we’ll talk in depth. We’ll take a deep dive on that somewhere later on, but for right now, It’s it’s key focus is like armor. You know, you, you look at the warriors that used to be, if, if you watched any movies with those knights or whatever, and the armor they had when they went to battle or, or some of those old movies and some of ’em carried a shield, you know, their armor basically, that’s what this cover’s doing.

We don’t want to do that. I want to help you to discover how we can do this, the natural way, how we can make this into the best soil that, that it’s, it’s capable of producing. And in that you get to see the process of how that all works. So the armor layer and what this is, it’s, it’s just grass clippings  that we cut a few days ago.

Um, there’s a lot of things we have to do with it in order to avoid issues that can Crop up later on. Um, but the whole thing is, is that that’s your takeaway for today? The armor layer, the number two principle in building and maintaining a disease pest free program, or I don’t want to call it solution.

Because solution means end all be all, you know, and we’ll, there’s still things that could pop up. I, I don’t wanna promise you that, but once you start building things this way, one thing I can promise you is that a lot of that stuff will leave your mind. It won’t be poking away at you as hard. It it’s like it’s kind of a forgotten thing.

And will it happen? Yes. Will you get some type of pests that are gonna move in? Yes. Will you have some type of disease at some point in time? Yes. But. May not be as much of it. It may not be as severe. You will know more what’s going on when it does happen. So with that, you know, I promised you that I’d finish a little story about my grandfather when he came to this country or when he came to this part of the country from Wisconsin and he had a neighbor to the south.

Now this story’s actually wrote in a journal. My good friend that started back a year or two before I did with no-till on a large production scale, He had this, he, he found this in his grandfather’s journal and he brought it to a, a conference that we were at it’s. It was a, um, an agricultural conference and he was reading it after speaking there.

And he talked about how his grandfather got his 160 acres just like mine did. And so he went and he actually broke it, which means he plowed it and started tilling it just like what we were talking about, what happens when you break the cycle, he broke that cycle in that natural process. But anyway, he broke the natural cycle not even knowing what was happening.

And he planted half of that, 160 acres, and he seeded it to oats, a crop of oats of tame oats. And that summer, while he was waiting for harvest, he built a grainery and he built a big grainery. He built a 10,000 bushel grainery, cuz he figured he’d have enough room when he broke, got the whole 160 acres broke and started farming the whole thing.

Well, lo and behold, that fall, he filled that 10,000 bushel grain. With oats, he filled it plump full of oats off that 80 acres. After that, he never was able to fill that same grainery again, off that same 80 acres. Why? Because he broke the cycle. The soil burned out in the first year, the oats wasn’t able to feed the soil back.

Because it was busy sucking up the nutrients that were there the first year, but then as far as putting anything back that’s that takes time. That takes years and disrupting that cycle it it basically killed the system. So I found it as a very interesting story. It was in a journal that his grandfather wrote and, you know, it’s something that we don’t think about.

So with that, I have something really exciting plan for you, and I’m real excited to share it with you. So I hope you’re getting value out of these little mini lessons that we have here or this little mini helpful tips that we have. And with that, I’ll look forward to talking to you again soon. 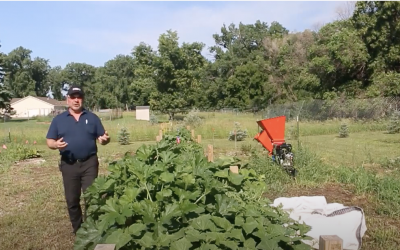 So let's look at "pests & disease" through a little bit different lens for just a little bit here. And with that, you know, my mentor of over 30 years, one of the first things I can remember him saying that I never forgot is that to study and, and just take a look...