And we’ve been talking about how that cycle gets disrupted. And this whole thing is about how we can have planting a whole lot simpler in, in this segment of it. And so in a nutshell to have planting simplified  in an environment that we have a natural growing cycle. We can’t break the cycle. And the number two principle in that cycle that aids us is what we call armor layer or cover.

Now I have an example of it back here, and I just did this a few days ago here. It, uh, Got away on us a little bit. We come back and cut it back down, and now we’re coming back. And the, the important thing is that we got root structure in the soil. So we come back in and we put our armor layer in here. Now to simply plant in this, all we do is move a little bit of this out of the way.

We get down to where we find some bare soil, right in that spot. We don’t till the soil. We just find the top of it. And we’re able to plant right into that. I’ve done no dig potatoes over here for this is going on my third year. We’ve got some pretty awesome pictures from the last couple years of the potatoes that we raised and we didn’t need a shovel to do anything.

There were simply no dig potatoes. So that’s your tip for today is always keep stuff covered. Never have any soil exposed. We want everything covered. So with that, the last time I promised you that I would have. Kind of a sequel or whatever, to the story about grandpa. And he had a neighbor that was like eight miles to the south of where he homesteaded did the same thing.

Took on his 160 acres and he broke (tilled it up) that first summer. He broke the 80 acres. He broke just half of it. And he seeded that half to oats that summer, he built a grainery and he built big enough so that when he had the whole 160 acres broke, he’d have enough storage room for his crop. So he planted that 80 acres to oats.

He got his grainery built to a 10,000 bushel grainery. It’s in a journal. Uh, Darrell has this wrote down, his grandpa wrote it in a journal and he, he found this journal in his, in his things that he’s carried with him through the years. But so grandpa harvested the 80 acres of oats that year. He filled that grainery to the brim 10,000 bushels oats off 80 acres.

So he goes back and as the story goes, He was never able to fill that same grainery again, off those same 80 acres after that. So why is that? Well, he broke the cycle with tillage. He removed the armor from the soil and buried it with tillage. I mean, the whole thing got disrupted that natural growing cycle.

Got disrupted and it couldn’t repair itself. The only way it can repair itself is we have to go back and start practicing those principles by not meddling and number two, the armor layer. So with that, thanks for watching. I’ve got something really special in the plan for you in our next video here. I think you’re gonna really enjoy it.

I’m I’m really excited to share it with you. So with that, we’ll be talking to you soon. 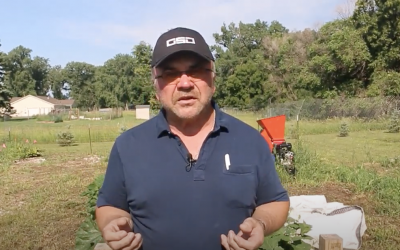 So, let's take a look at "planting simplified" through a little bit different lens. You know, one of the first things that I remember my mentor saying is that you can study an area, take a look at what's growing as far as native vegetation, natural vegetation take...

END_OF_DOCUMENT_TOKEN_TO_BE_REPLACED

There's a lot of emphasis on everything that needs to be done and a lot of misinformation out there with planting. So planting simplified is just like, it says, it's a very simple process that we've implemented for some time now in vegetable gardening. And I'd like to...