And that’s all part of this natural growing cycle. So today with soil life, we’re gonna learn about how important the number two principle is. And that number two principle is cover. We refer to it as the armor. And the reason it’s an armor layer is because it’s like a protective cover. It’s just like the warriors that fought that were shielded.

They had that protective cover on ’em and that’s what we provide. That’s what we use over the soil, you know, in a, in the native vegetation, it, it has its own armor layer. You know, it, it builds it very slow, but the advantage we have is we can do it so fast. We can do it manmade, like I said, in a previous episode here that we can hundred X vegetable gardening compared to production agriculture.

So behind me, this is. We’ve been applying armor layer and we let this go for a while and it grew up pretty good. Then we came in and we weed eated it real short again, now we’ve got the root structure back in the soil again. And this is like the third time we did that and we let it grow up and then we cut it back short and then cover it.

And what happens is this armor layer that we’re putting on top, it eventually goes away. It starts disappearing. Just unbelievable how fast the, the, the more we do this, the faster it goes away because the activity in the soil is, is getting stronger. And we want this, you know, we could come in and, and just put a biodegradable mat down and that would be the end of it.

But we want something that feeds the soil underneath, that feeds all that microbiology so that  keeps growing and increasing. So that’s why I like putting, I like using carbon on top and you know, there’s some grass stems poking out. First time I’ve been out here, we did this about two days ago, and first time I’ve been out here and I can see some greens starting to poke through in places, but, you know, that’s good.

That’s the plants that just want to keep growing. And that’s neat to see when you have plants that want to keep growing. That’s that’s a really good sign. So today’s tip is armor armor layer, number two, principle. It’s so important. It serves many, many functions that we will talk about later on, but important thing is, is to keep that soil covered. So. We have that shield over everything that’s underneath.

So last time I told you I would finish the story about grandpa  and about my good friend, Darryl. He lived about eight miles south. Uh, Darryl’s grandpa homestead eight miles south of my grandpa. And he had the same thing with 160 acres, back then that was the free claim for a promise to homestead it.

He tilled it first. He broke that cycle and he, he just broke half of it. He broke 80 acres of it and he seeded it to oats. Well, that summer before harvest grampa built a grain bin, Darrell has this wrote down in a journal. His grandfather wrote it in a journal. Darrell found it, and he was at a conference reading. And it was kind of an amazing story, but his grandfather and it it’s quite detailed and I’ll shorten it up.

But you know, his grandfather, he built that 10,000 bushel grainery with the idea that when he broke the entire 160 acres, he’d have enough room for all of the 160 acres. Well, lo and behold, when he harvested his oats that fall, he filled the grainery off that 80 acres. As the story goes on, he was never able to fill that grainery again, off them, 80 acres, like he did the first time, why he broke the growing cycle.

He broke that growing cycle. Number one with tillage, number two, he got rid of that armor layer that’s on top and there wasn’t anything protective to help the soil. So basically the plants are on their own. And they struggle on their own. So with that, so when we come back here in a few days, I’ve got something planned that’s I think you’ll find really exciting.

It’s, it’s, uh, it’s really an exciting thing for me. And I’m gonna be, I I’m excited to share it with you. I just, I can’t wait to get out there and start filming and doing some things and I travel a little ways to get to it, but, um, I’m really excited to share it with you. So stay tuned. Look, look for the follow up on this one for a, for another email coming here in a, in a few days or so.

And we’ll look forward to talking to you then. 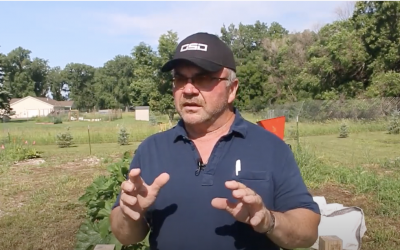 So, let's take a moment and look at "soil life" through a little bit of a different lens. You know, my mentor of over 30 years, one of the first things that I learned from him is to study the natural vegetation around you, study the natural or what they call native...

END_OF_DOCUMENT_TOKEN_TO_BE_REPLACED

So soil life. Let's talk a little bit about soil life. You know, soil life is the life of vegetable gardening, which is quite obvious, but how do we get there? How, how do we build soil life? There's, there's lots of methods out there. There's lots of books being...