So, let’s look at “weeds gone” a little bit through a different lens. You know, a mentor long time mentor of mine. One of the first things I can remember him talking about is how to look around you and take notice to the natural, the native vegetation that’s growing around you. And it will tell you a lot what’s going on in the area, what you can grow, what will grow what’s best.

Today we the zone thing, one to eight, you know, and be Frank, I haven’t paid a lot attention to that. Not that there’s anything wrong with it. I think it’s a good guide on the back of the seed bags, but the point being is that I kind of go by what Dr. Dwayne Beck taught me and that’s studying what grows what’s in the area I am wanting to set up in.

And it’s, it’s served me well through the years now weeds gone. Um, yeah, we can have weeds. Are they gone in this project this year? No. And that just goes to show that we can’t skip, there there’s a step in there that we, cannot skip. So my name is Steve Szudera, if you haven’t been introduced to me before and this is the first time viewing me.

I’m the founder of tabletop top farmer. Uh, you know, we we’ve been doing this about eight years now, go going on eight years. So, um, we’ve been at it a little while, come from 40 years of production, regenerative growing systems. This short little story goes back to last winter. I lost my accountant. Uh, retired, didn’t lose them, but he retired.

But anyway, nonetheless, so had to find a new one. So, I am talking to this lady and stuff in the end of that process, and we were sitting at her kitchen table, and she was interested in what I was doing and stuff. And I said, you know, Debbie, I said, I can kind of tell out front by looking at your lawn that you have pretty darn good soil here.

And she looked and she said, yes, I do. She said, I’ve been here, it was four years ago. I moved here and when I was working in my back yard in the soil trying to control my weeds and stuff. Whoa, wait a minute here. Working in the soil to control weeds. Number one thing with weeds gone, we don’t work in the soil. Working the soil exposes weed seed, which is always everywhere.

And then they germinate. Now we want to do the same thing as mother nature that happens in the native vegetation that we want to get back to the natural side of thing. So, if we look at it, if we look at that native vegetation or that natural vegetation, that’s out there, is there any weeds in it? No, it’s mostly made up of grasses and select broadleaf plants and in an average natural environment, if we take a snapshot of the native Prairie.

Which we see in like old Western movies, um, wagon trained movies, things like that. That’s the native Prairie of what used to be. There’s not a lot of it out there anymore. It’s disappearing fast. The point being in that natural environment, there isn’t any weeds growing out there. You know, if, if the, the basic occasionally, you know, we’ll see a few, if there’s a bare ground, then, then we’ll see weeds.

You know if there’s a, a native Prairie and suddenly, we got bare soil. We might see weeds there. And there’s a reason for that. So last email, I almost, so that, that’s the one thing I told you that I would give you the, the, the main tip in weeds gone is when we mettle with the soil, that’s when we get the flush of new weeds.

The next thing that I told you is, I’d tell you a little story about my grandfather and how he got out here. You know, he, he came out from Wisconsin. My mother’s told me this story long, long ago, and he slid a plank underneath a rail car in Wisconsin and he rode out. And when he got out to Western North Dakota, that’s where he got off.

Now, why did he get off, you know, is that where the train stopped? No, you know, there’s a lot of reason I’ve thought about that over and over.  in my mind. I can imagine him laying underneath that rail car, staring out at the countryside, and watching the lay of the land, watching the, the Prairie and when he saw and, and where he got off, it’s kind of a valley and it’s beautiful and they call it golden valley.

That’s the name of the county? I, I can imagine when he, when he got off, you know, he, he knew this was a place where there’s fertile ground. See, he came from a place where they wore the ground out and they had to move because it got to where their production just kept going down, down, down. They couldn’t couldn’t raise food and back then they raised food to survive.

And. They, they couldn’t do it anymore. So, it was time to move. It was time to move west. Like a lot of others did in that, in that whole movement. So, then he went to the land office and got his stake or his pin or whatever it was that time, If you went out there, you got 160 acres and he went and put his stake on that quarter land 160 acres.

Now that chunk of ground is still in our family today to this day. My dad, when we were farming, He used to tell me stories about when he was a kid and, and on the, on that 160 acres doing what they did back then, they did, it was all tillage in, in the next email. I’m going to tell you something about a story to the south of there.

How things changed. Just remember I told you Wisconsin, why they moved. I want to tell you a story about how it’s changed out there and. A very short period. But with that, I hope you get value out of this. I look forward to talking to you, be on the outlook for the next email, and I’ll have more about weeds gone for you.

So, until then, thanks for watching. 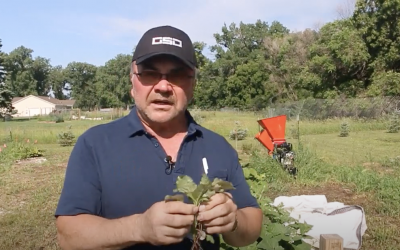 Hello! And we're back with another video on another tip, we're gonna talk today about what can help in your project to be weeds gone in this natural growing cycle of vegetable gardening. You know, we we've talked, we've covered a lot of ground up to this point. You...

END_OF_DOCUMENT_TOKEN_TO_BE_REPLACED

Weed's gone. It's the topic that you came in on, you got the results report, hopefully in your email inbox, and hopefully you found some value of that. You know, weed's gone is always a, a pretty hot topic in vegetable gardening. It's, uh, there's always an issue. It...